A Dance to the Music of Time 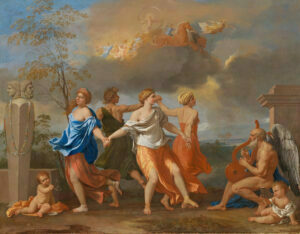 When I was studying for my MA, a few centuries ago, my professor sat me down in front of a reproduction of a Poussin painting, The Triumph of Pan, now in the Louvre and on loan for this exhibition. He gave me a protractor, a compass and a ruler. I was instructed to analyse and measure the internal geometry of the painting with these tools, and I completed this exercise obediently if somewhat sceptically.

The painting soon disappeared into a crystalline abstraction of cones, triangles, squares, diagonals, and parallelograms – all covered by a cat’s cradle of lines. What had been beautiful to me quickly lost its meaning, like repeating a word over and over again. The mythic symbolism of the painting, its graceful internal rhythms, its balletic play of colour, its strangely diffuse light, and its kinetic dynamism utterly disappeared. Aesthetics became mathematics.

So, I must own up right away to a certain hesitancy about this artist and he remains, to this day, an austere, intellectual mystery to me. Anthony Blunt, Keeper of the Queen’s pictures and the 5th Cambridge spy, was his greatest advocate in my student days. Another august Anthony, Anthony Powell, called his great roman fleuve, A Dance to The Music of Time after Poussin’s great painting of 1634, from London’s Wallace Collection, and now the very centrepiece and piece de resistance of this beautiful show. Movement is the core element in Poussin’s painting, and the title of this spare and elegant exhibition explicitly invites us to join him in the three-dimensional dance of static two-dimensional figures.

A favourite of popes, First Painter to King Louis XIII, and patronised by Cardinal Richelieu, his work has been revered down the centuries by artists as wildly diverse as the neo- classicist Jean Auguste Dominique Ingres, the post-impressionist Paul Cézanne, and the expressionist Cy Twombly. Poussin himself revered the ancient sculptors of Greece and Rome. No artist emerges from a vacuum. The history of art is a circus act. One artist balances upon another. “Standing on the shoulders of giants” as Isaac Newton put it. There is no empty white space. No beginning and no end in art. Creativity is a continuum. If there is a ground zero in art (cave paintings? petroglyphs? cuneiform?) the origins of art are as mysterious as the Big Bang. Poussin, so beloved of 17th century cardinals and kings, is no different, and his work gains hugely in this show by being set against the ancient Attic sculpture of Greece and bas reliefs of Roman art that made him shine as an artist. It is revelatory and humbling to see this work, separated by almost 2000 years, in a room together.

Rome is his nirvana. He tried to get there three times as a young painter, finally succeeding in 1624, aged 30. The great Borghese vase from the 1st century BCE, and the frieze of Roman dancers, the Borghese Dancers, both from the Louvre, are clearly templates for his own romantic baroque visions of dancing satyrs and nymphs. This juxtaposition is useful. Poussin’s work becomes suddenly so much more accessible. Reading it is so much easier. Placing his paintings, with lots of air around them, against the slate blue walls of the National Gallery sets his work in the context of classical Rome, the Eternal City.

This is the key. It is humbling and illuminating. Now I get it. Without the aid of my professor’s geometry set.

Art history is a dance to the music of Time.

“Every time I come away from looking at Poussin, I know better what I am.”